Impacts of 2019 Negative List on Foreign Investments in China

Accompanying the increased heating and tension between China and the United States, China recently adopted series of new laws and regulations that will have huge impacts on potential and existing foreign investments in China.

On March 15, 2019, the long-awaited Foreign Investment Law (“FIL”) was approved and promulgated by the National People’s Congress, which will come into force on January 1, 2020 and upon its effectiveness, will become the fundamental law by providing unified rules and standards for all phases of foreign investment in China (please refer to our previous article related to the FIL). On June 30, 2019, National Development and Reform Commission (“NDRC”) and the Ministry of Commerce (“MOFCOM”) jointly published the 2019 edition of the Special Administrative Measures (Negative List) for Access of Foreign Investments (“2019 Negative List”), and the 2019 edition of the Special Administrative Measures (Negative List) for Foreign Investment Access in Pilot Free Trade Zone (“2019 FTZ Negative List”), which will come into effect on July 30, 2019. FIL and the two 2019 Negative Lists jointly form the new legal framework of foreign investments in China, and indicate the new trend of further opening market and welcoming foreign investors by Chinese government.

Shifting from the Catalogue of Industries for Guiding Foreign Investments (“Catalogue”), which listed all industries that were encouraged, restricted or prohibited from foreign investments, the first nationwide Negative List is the 2018 edition, which largely simplified the Catalogue and only contained industries that were not allowed to be invested by foreign investors and applicable special requirements. Compared to the 2018 edition, the 2019 Negative List is further shrunk. Below please find a summary of difference between the two editions: 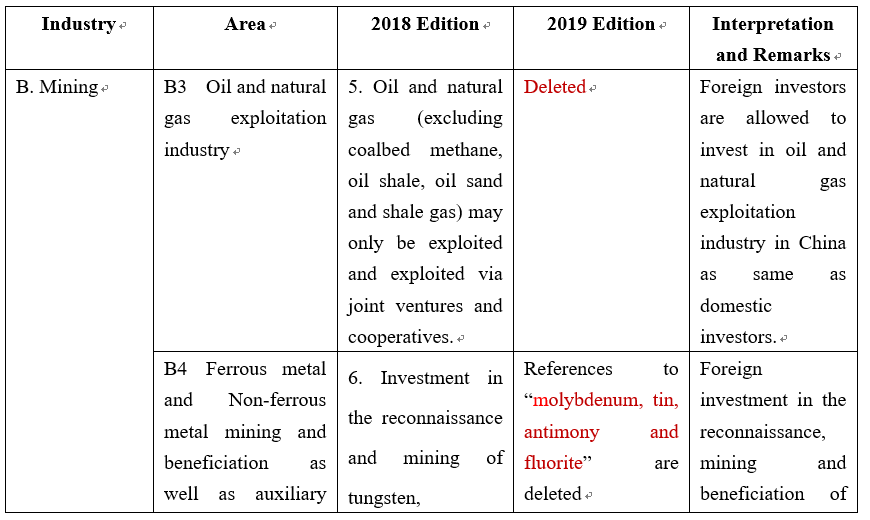 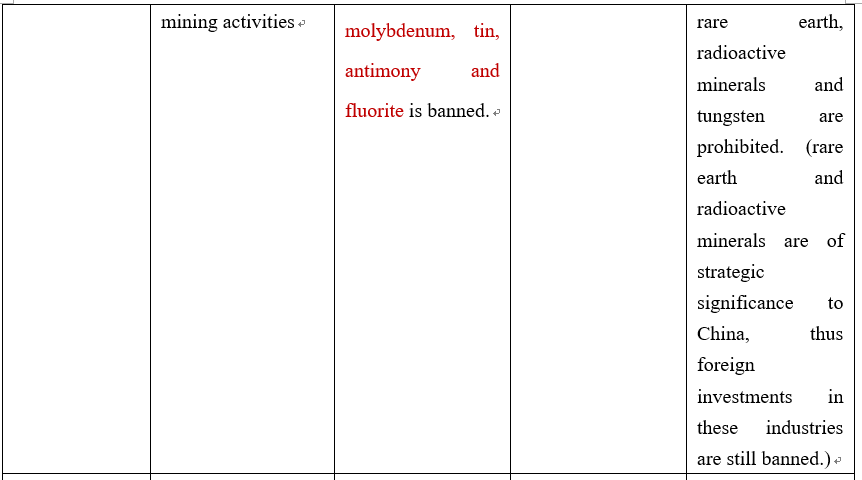 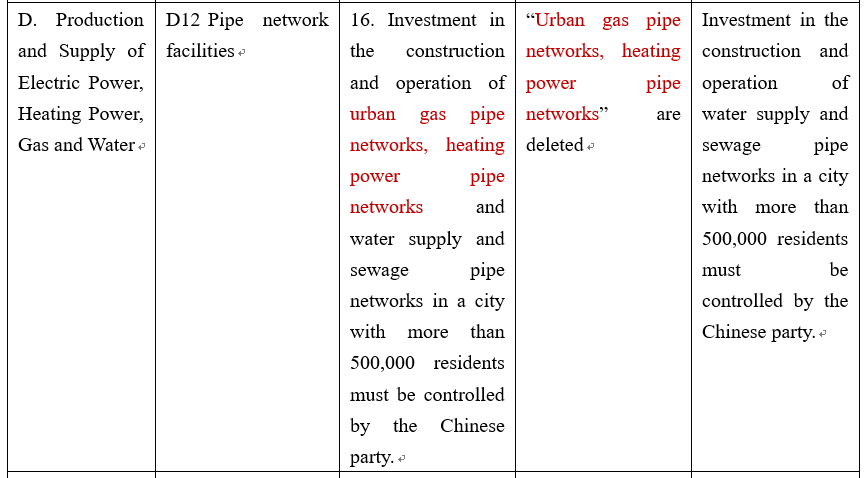 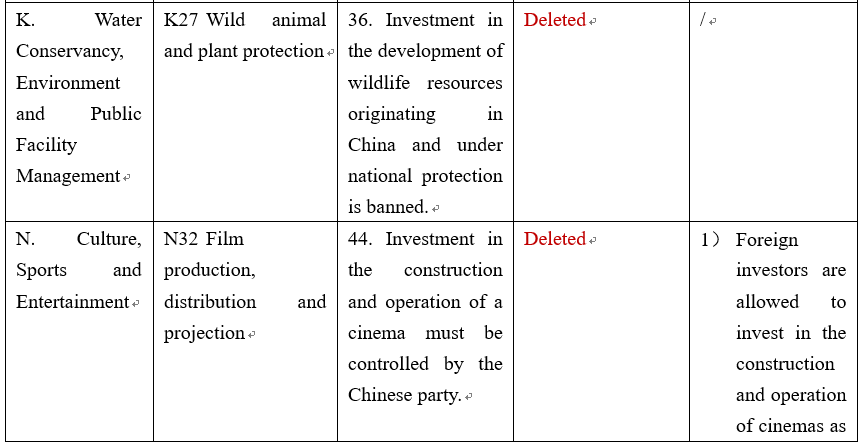 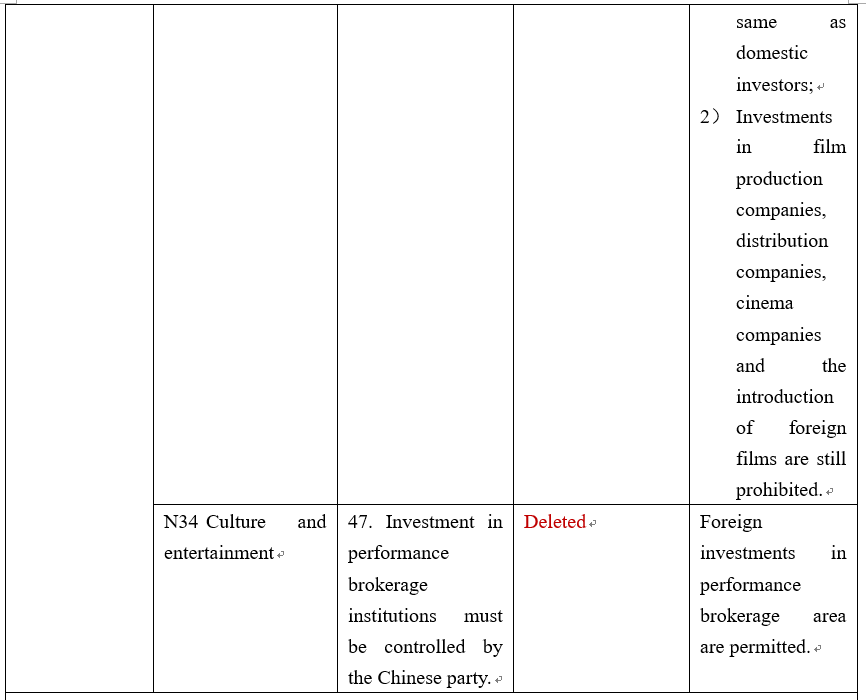 （1）The reference number of each investment area   is based on the 2018 Negative List. The “area” is no longer marked in the 2019   Negative List;

（2）2019 FTZ Negative List contains not only   less restricted/prohibited industries/areas (such as fishery industry, and the   smelting and processing of radioactive minerals and the production of nuclear   fuels), but also provides lower requirement for domestic equity shareholding   (such as 34% in seed industry) and for printing industry, the requirement for   Chinese party’s shareholding is completely abolished.

（3）Both the 2018 and 2019 FTZ Negative   Lists expressly provide that the special administrative measures adopted   in Shanghai Free Trade Zone related to telecommunication business may   be implemented in other free trade zones in China.

The abolishment of certain restrictions/prohibitions in Shanghai FTZ may indicate a trend of nationwide abolishment in near future.

The 2019 Negative List opens new market and investment opportunities for potential foreign investors, such as reconnaissance and mining of molybdenum, tin, antimony and fluorite, production of Xuan paper and Chinese ink ingot, and development of wildlife resources originating in China and under national protection. More industries/areas are allowed to be wholly foreign invested, such as oil and nature gas exploitation, construction and operation of large urban gas and/or heating pipe networks, construction and operation of cinemas, and establishing performance brokerage institutions. The 2019 Negative List also provides timing for further or even complete opening of certain industries to foreign investments in the next couple of years, such as automobile industry and finance industry. The production of commercial vehicles will be opened to wholly foreign-owned in 2020; the production of passenger vehicles will be opened to wholly foreign-owned in 2022; and at the same time the restrictions on how many joint ventures a foreign investor may establish in connection with the production of same type of vehicles will be completed abolished. The requirements for minimum shareholding percentage by Chinese parties for securities company, securities investment fund management company, futures company and life insurance company will also be completely abolished in 2021. Therefore, we may foresee a lot of wholly foreign owned automobile and finance companies will be established or will be restructured from existing joint ventures in the next three years.

Foreign investors in these industries should re-consider their investment and operation strategies in China from a new angel. Restructurings of current operation structure in China and negotiations with existing joint venture partners are to be put on schedules.